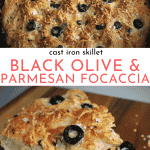 Whenever I make the mistake of grocery shopping on an empty stomach, I often find myself wandering away from my list, especially in the bakery section. So many times, I've loaded my basket with fresh cinnamon rolls and baguettes, but mostly the flavored focaccia offered by a few of my local grocery stores. They usually offer several flavors of focaccia, but my favorite was always the black olive and parmesan variety.

I say that that flavor "was" my favorite, because with this recipe, I can make an even better version myself! It tastes just like a grocery-baked version, without any preservatives, a fresher taste, and so much more flavor!

Plus, it's so quick! Sure, you might think that focaccia is too much work, or takes too much time. While focaccia can sometimes be time-consuming, this no-knead focaccia recipe is not! Thanks to instant yeast and a quick proofing technique, you can have focaccia in just one hour.

If you aren't cooking with cast iron, you're missing out! A well-seasoned cast iron skillet is a perfect option for sweet and savory dishes alike. I've used my skillet for steak, casseroles, potatoes, braised chicken, corn bread, and cakes, and pizza! It's perfect for cooking evenly and getting nice and hot. In this cast iron focaccia recipe, the cast iron skillet made the edges deliciously crispy, but the center of the bread was soft and flavorful. If you don't have a cast iron skillet, you can definitely still make this in an 8 or 9-inch cake pan.

I think this no-knead cast iron focaccia recipe is a great alternative to store-bought bakery bread, and would be a fantastic complement to any meal! Try it yourself and let me know what you think!

If you're interested in another Italian-inspired recipe to go with this cast iron skillet focaccia with black olives, you should try my Orange Rosemary Olive Oil Cake. It's so easy, and full of bright citrus and olive oil flavor!

Another one of my favorite yeast bread recipes you might also want to try is my Pumpkin Pecan Cinnamon Roll Recipe. These rolls are big, soft, and full of amazing spices. Plus, they're topped with a luscious brown butter cream cheese frosting that is SO good. Give them a try!