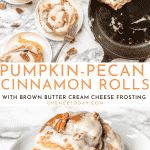 How to make pumpkin spice cinnamon rolls - restaurant quality right at home! These pumpkin cinnamon rolls are so soft and fluffy, with an incredible brown butter cream cheese frosting! And if you love these, try my Apple Pie Cinnamon Rolls, my Apple Cider Donut Cake, or my Pumpkin Mousse Pie with Maple Cookie Crust!

I love fall! Cooler temps, changing leaves, and all my favorite fall traditions! Especially fall baking! Autumn baking brings so many warm, comforting, and indulgent flavors -- it's like getting a hug from your food! And these pumpkin spice cinnamon rolls are a perfect example!

I can't say enough about these -- they are the BEST pumpkin cinnamon rolls! They're full of all the best fall flavors -- pumpkin (of course) pumpkin pie spice, brown sugar, vanilla, and my favorite: brown butter!

You'll get the comforting goodness of the autumn season in every bite. These pumpkin spice cinnamon rolls are the perfect way to start your fall season!

How to make the best cinnamon rolls

But trust me when I say these big, gooey pumpkin spice cinnamon rolls are worth it! When you spread on that brown butter cream cheese glaze and bite into the soft dough, you'll thank me!

But to help you make them the best they can be, I'm including all my tips for how to make pumpkin spice cinnamon rolls, step by step! So let's get into it!

Here's what you'll need to gather for the cinnamon roll dough:

What is cinnamon roll glaze made of?

Finally, we'll make our brown butter cream cheese frosting to spread on our warm rolls. This is the easiest part -- here's what you'll need!

These pumpkin spice cinnamon rolls doesn't require any complicated tools, but for the dough you will want a stand mixer, or a wooden spoon, and you'll need your baking pan to bake the cinnamon rolls in! I used a 10-inch cast iron skillet and I definitely enjoyed the results, but you'd be fine with a 9x9 baking dish as well.

You'll also need a rolling pin to roll out your dough, a large bowl to rise your dough, and a small bowl to mix your pumpkin spice and brown sugar for the filling!

Working with instant yeast. Making a yeast bread dough can be intimidating if you haven't done it much, but this one is so easy, in part because we're using instant yeast! First off, make sure you use a fresh packet of yeast to ensure that it's active and ready to go. Then make sure your buttermilk is warm to the touch, but not too hot, before you sprinkle yeast over it.

If the yeast and buttermilk mixture doesn't get foamy, then your yeast might be too old or the buttermilk may have been too warm. But not to worry -- the good news is that you've figured that out right at the beginning of the process, and you can try again!

Letting your dough rise. You need to let your dough rise twice in a large bowl in a warm place, which will vary depending on your kitchen -- for instance, I have a radiator in my kitchen so the air near it is around 80 degrees, and perfect for letting dough rise.

But an easy way to get your dough to rise quickly is to heat your oven to 150 and turn it off; then let your dough rise inside. You can also set the greased bowl on top of your refrigerator, or just a high shelf. Just watch carefully, since the rising time may vary with each of these options. Your dough will need to rise until it's doubled in size, which should take 30 minutes to an hour each time.

Browning your butter. I have a whole blog post about how to brown butter! It's definitely a great cooking skill to master, because brown butter makes such a huge difference in both sweet and savory dishes! Check out that post for the easy step-by-step process!

Toasting your pecan chips. Toasted pecans make a huge difference in this recipe! I like to just throw my pecan chips in the same pan where I browned my butter, and toss them a bit until they're golden brown and smell fantastic! Let them cool a bit before adding them to your cinnamon rolls.

Rolling out your rolls. You'll want to roll your dough out into a large rectangle on a lightly floured surface. I've tried rolling out cinnamon rolls on parchment paper, but it's hard to keep it from moving around. My favorite options are directly on the clean counter or table, dusted with a little flour, or if you have a nonstick pastry mat or pastry board, even better!

Overnight option. If you're planning to make this pumpkin cinnamon roll recipe for breakfast, it might be a good idea to start the night before! Once you have your cinnamon rolls in your greased pan, just cover the pan with plastic wrap and let them rest in the fridge overnight while the dough rests.

The next morning, you'll just need to let the rolls rise in a warm spot until they've doubled in size, which should take about an hour, and then bake them like normal!

Fresh vs. Canned Pumpkin Purée. I've heard from some of my fellow bakers that they're having difficulty finding canned pumpkin -- if you're in the same boat, you might be wondering how this pumpkin cinnamon roll recipe works with puréed fresh pumpkin.

Unfortunately, I'm wondering that myself -- I haven't tested it out! But I would imagine that it would be fine. You might just have to adjust the amount of flour to accommodate any excess liquid from the purée. If you do try this pumpkin spice cinnamon rolls recipe with fresh pumpkin purée, let me know in the comments how it goes for you!

While dough is rising, prepare filling:

Brown Butter: For tips, images, and a step-by-step process of browning butter, check out my How to Brown Butter post. Overnight option: If you're planning to make this pumpkin cinnamon roll recipe for breakfast, it might be a good idea to start the night before! Once you have your cinnamon rolls in your greased pan, just cover the pan with plastic wrap and let them rest in the fridge overnight. In the morning, you'll just need to let the rolls rise in a warm spot until they've doubled in size, which should take about an hour, and then bake them like normal!

How many calories are in a pumpkin spice cinnamon roll?

Based on the nutrition calculation in the recipe card above, these pumpkin spice cinnamon rolls have 516 calories each. Nutrition Disclaimer

Both! Enjoy them warm while the frosting is still gooey, or enjoy them after they've cooled!

What goes good with cinnamon rolls?

These pumpkin spice cinnamon rolls are perfect for a fall brunch. They'd go very well with my 3 Ingredient Pumpkin Muffins, my Fruit Charcuterie Board, and my Oat Milk Pancakes!

How do you keep cinnamon rolls moist?

To keep these pumpkin spice cinnamon rolls moist, store them in an airtight container in the fridge. If possible, wrap them individually to further prevent them from drying out.