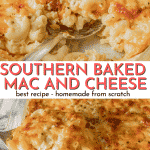 And if you like this old fashioned mac and cheese with evaporated milk, you'll want to check out Pressure Cooker Ham Braised in Beer, Puff Pastry Tart with Cranberry and Brie, and Brown Butter Sweet Potato Pie!

For my family, there are certain foods that are absolutely mandatory for us to have for family gatherings and special occasions. You have your hams, your turkeys, and roast beefs, but the stars of the show are definitely the sides and desserts. Cornbread dressing, collard greens, sweet potato pie, and pound cake are never missing from the table. It just doesn't feel like a holiday without them. But one of our all-time favorite recipes is baked macaroni and cheese, and this creamy southern mac and cheese recipe is our go-to!

Homemade mac and cheese recipes can vary wildly, but for me the best kind has a cheesy custard filling made with egg and evaporated milk. Then it's got a topping of even more lightly browned cheese. If you haven't had this style of old fashioned baked mac and cheese with evaporated milk, this will be your new favorite side dish!

How do you keep mac and cheese creamy?

Getting creamy mac and cheese can be a challenge, especially when you're using this custard-based method. That's why I'm sharing my secrets with you to make this southern baked mac and cheese just as creamy as can be! But before we continue, these are secrets! I'm sure I can trust you guys to keep it on the hush. But just make sure no one is looking over your shoulder while you read this. Ok, if the coast is clear, read on...

Normally, you would want to cook your macaroni until it's al dente -- that is, it still has a bit of a chew to it. But for this recipe, forget everything you learned from Giada de Laurentiis and boil your macaroni for two minutes longer than the maximum time listed on the package directions. For example, the macaroni I used instructed me to boil it for 8-10 minutes, so I set my timer for 12 minutes.

So how does this make your southern baked macaroni and cheese creamier? Well, as your macaroni boils, it absorbs water. So by boiling it a little longer, we're preventing the macaroni from absorbing too much of the milk while it's baking, allowing more of the milk to form that creamy, cheesy, custardy filling around the pasta. Trust me-- it works!

OK, forget what I said about not being in Italy, because we're using a classic Italian ingredient to add to the creaminess of this soul food baked mac and cheese! Mascarpone is an Italian cream cheese that adds a smooth, mild soft creaminess to bump up the creamy flavor of the cheese filling even further!

I got this idea from my Uncle Glenn, who told me about using mascarpone many Thanksgivings ago when I asked him how his mac n cheese recipe was so amazing! The mascarpone really takes it up a notch and makes this the best baked mac and cheese recipe!

Secret #3: Coat your macaroni in butter

You may have gathered from secret #1 that the key to making this easy baked mac and cheese super creamy is keeping the macaroni from absorbing too much liquid as it bakes. That's what this step is about as well! We're going to toss the cooked macaroni in butter before adding the other ingredients. This creates a barrier that prevents the other liquids from penetrating the macaroni as it bakes. It should help you to end up with more cheesy custard filling that makes the finished dish delicious!

This definitely isn't much of a secret. But you'd be surprised how many people still use pre-shredded cheese to make their macaroni and cheese! It's so much faster, but pre-shredded cheese is often coated with cellulose (wood pulp!) to prevent it from sticking together, which dries it out significantly. This dryness will then translate into your dishes, which we definitely don't want.

For this southern baked macaroni and cheese, you should definitely buy your cheese in blocks and grate it yourself to keep the sauce nice and creamy. It's an extra step, but makes a huge difference!

What are the 3 best cheeses for mac and cheese?

First, I like to use one semi-hard aged cheese like sharp cheddar. Then one creamy cheese that melts well, like mild cheddar, mozzarella or Monterey Jack. And finally, an extra-creamy cheese like mascarpone or cream cheese just to add to the creaminess of your southern baked mac and cheese recipe!

What milk is best for mac and cheese?

For me, evaporated milk is the way to go. Making old fashioned baked mac and cheese with evaporated milk is second nature to me. And I think it produces the creamiest results! Evaporated milk also works with the egg to create that custard filling that I just love. Here's everything else you'll need:

How do you make southern mac and cheese from scratch?

This is such an easy baked mac and cheese recipe! This video shows you how to put it together, step by step!

What does putting an egg in mac and cheese do?

It's a matter of texture. In this recipe, we're going for a creamy, yet slightly firm custard-like filling. It's a texture that is distinct from stovetop macaroni and cheese. Many baked macaroni and cheese recipes use a roux to make a cheese sauce on the stovetop, and then transfer the mac and cheese to a dish, add more cheese and/or bread crumbs, and bake it. That's why I do in my Smoked Mac and Cheese with Bacon!

In my experience, the texture is different in a roux-based mac and cheese than with a custard mac and cheese. So making our southern baked mac and cheese evaporated milk and egg makes it come out a bit firmer and more casserole-like, but still able to achieve that rich creaminess that we all love! Plus, you won't have to add the extra step of making a roux -- everyone loves an easy southern mac and cheese recipe! 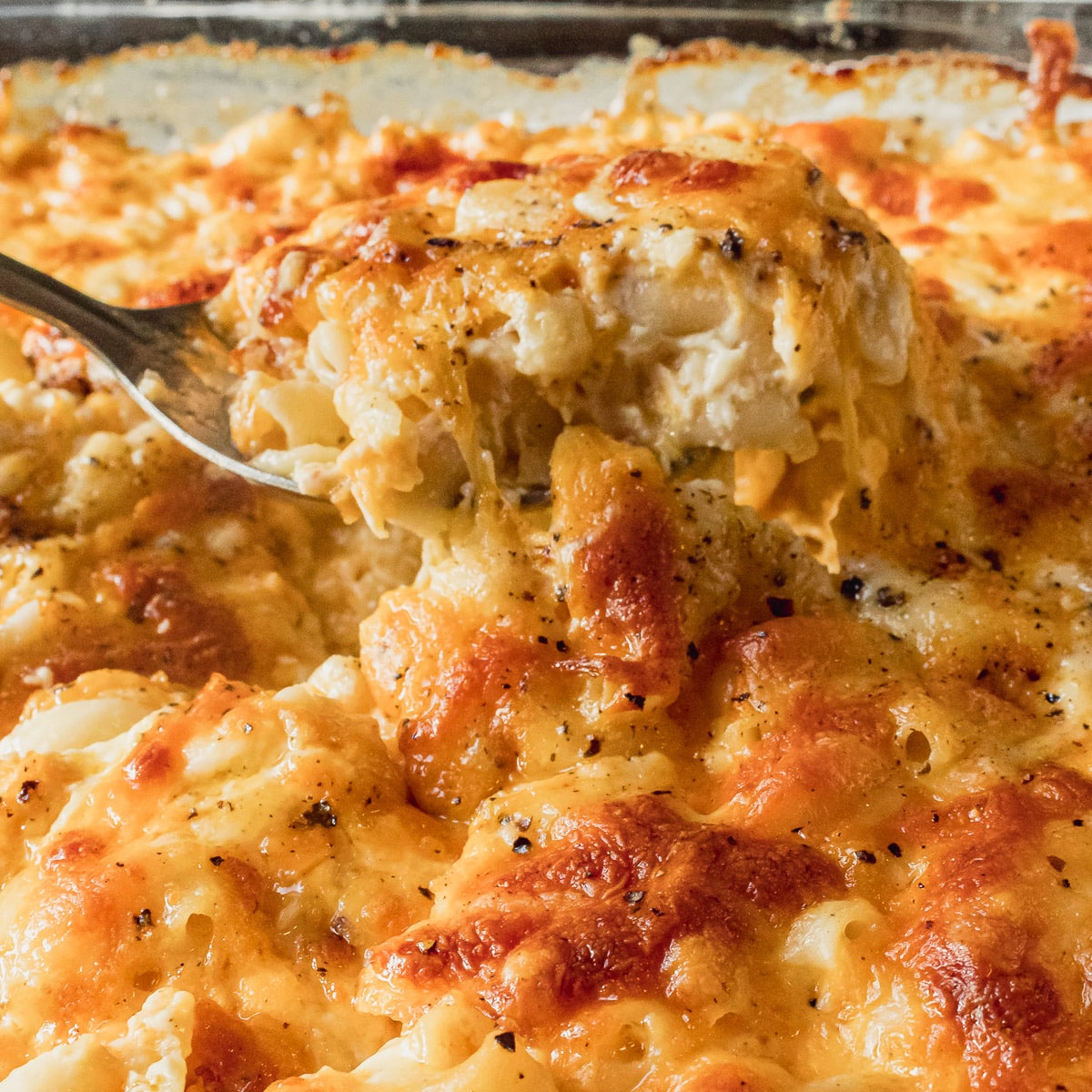 Why use evaporated milk in mac and cheese?

If you've ever made a pumpkin pie, a flan, or my Brown Butter Sweet Potato Pie, you may be familiar with evaporated milk. Evaporated milk is simply milk where some of the water has, well, evaporated. Because of the missing water, it has a higher protein content than regular milk. That makes everything creamier without adding extra fat (the way heavy cream would). It's perfect in baked goods when you want to create a custard made from eggs and milk, because it adds extra creaminess compared to regular milk.

What is the difference between evaporated milk and regular milk?

Evaporated milk has more protein than regular milk, but less fat than heavy cream, which gives this easy baked macaroni and cheese a thick, creamy filling without too much greasiness. Evaporated milk is also not refrigerated in most places, so you can get it in the baking aisle or on Amazon! Evaporated milk is a major ingredient in my Banana Pudding Cheesecake Squares and my Eggnog Bread Pudding with Brown Butter Rum Sauce!

What cheese should I use for mac and cheese?

This is really up to you! I usually use at least one block of cheddar, sometimes one block of sharp cheddar and one block of mild cheddar. Other times, I switch it up and replace one of the cheddars with monterey jack, gouda, or mozzarella. Any semisoft shredded cheeses work great in this easy baked mac and cheese recipe.

I make this easy baked mac and cheese recipe with mustard powder and a Creole seasoning blend like Tony Chachere's. But in general some other flavors I like to add to mac and cheese recipes (in addition to salt and pepper) are cayenne pepper, paprika, garlic powder, and onion powder.

Can I make this southern baked mac and cheese ahead of time?

Yes! You can prepare your mac and cheese the night before and bake the following day. Just complete all the steps except the last one (baking), and place in the fridge covered with plastic wrap. The next day, bake in preheated oven as normal, although you may need to add 5-10 minutes to the cook time.

Can this baked mac and cheese be frozen?

Yes, this southern baked mac and cheese freezes very well! Just cool the mac and cheese completely, cover tightly with plastic wrap and foil, and freeze for up to 2 months. Allow to thaw, still wrapped, in the fridge before baking as usual. I actually use this method to make my mac and cheese ahead of time for most Thanksgivings! You can also freeze leftovers in an airtight container for up to two months.

Why is mac and cheese popular in the South?

Mac and cheese gained popularity as a southern food after James Hemmings, the enslaved chef to Thomas Jefferson, mastered the recipe. It then became a celebration dish among Black people in the south, remaining popular to this day.

What can I add to my mac and cheese to make it better?

I prefer this easy southern mac and cheese as-is, but you can always mix in a few dollops of sour cream for creaminess. You can also add different types of cheese to your preference -- this Chick-Fil-A mac and cheese recipe uses Parmesan and Romano cheeses! I also love adding crispy chopped bacon for smokiness, sliced green onions, or a few splashes of hot sauce!

Is mac and cheese at Thanksgiving Southern?

Yes, old fashioned mac and cheese with evaporated milk is a southern classic for the Thanksgiving table! It's popular in the south all year long. 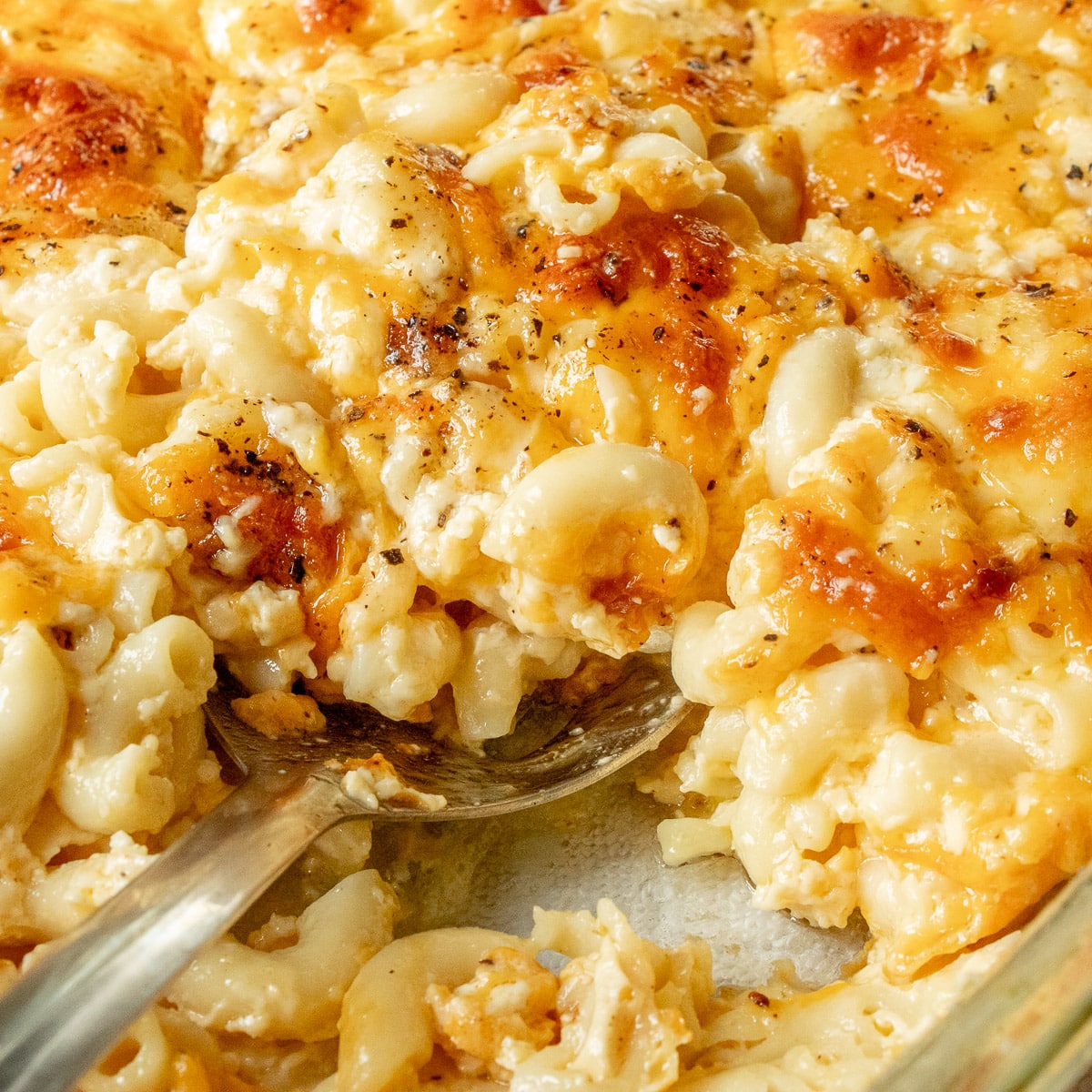 Make-ahead instructions: You can prepare this baked mac and cheese the night before and bake the following day! Just complete all the steps except the last one (baking), and place in the fridge covered with plastic wrap. The next day, bake in preheated oven as normal, although you may need to add 5-10 minutes to the cook time.  Freezing: This soul food baked mac and cheese freezes very well! Just cool the mac and cheese completely, cover tightly with plastic wrap and foil, and freeze for up to 2 months. Allow to thaw, still wrapped, in the fridge before baking as usual.