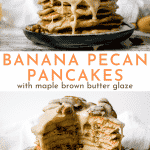 If you like these banana pancakes, you’ll love my Banana Bread French Toast, my Nutella Baked Oats, and my Dairy Free Banana Bread!

I grew up eating pancakes on the weekend with my family, and banana pancakes were my favorite! We always used the "just add water" box mixes, but they were delicious, and it was always such a special time to spend with each other. I didn't realize until I was older how easy it was to make pancakes from scratch! As far as I'm concerned, everyone should have a go-to pancake recipe that can be whipped up in a few minutes and brings back all those great memories. That's why I'm sharing this easy banana cinnamon pancakes recipe with you!

These pancakes are also perfect because they're fluffy, but the banana and sour cream help them to not be too dense or dry like a lot of restaurant or diner pancakes can be. I never knew why I didn't like pancakes from many restaurants until I started making pancakes from scratch -- some restaurant recipes are just too dry! You shouldn't have to drench every bite in syrup. The way I see it, pancakes should have a moist, tender consistency, and a rich buttery taste. That's why in this recipe we're including brown butter in the glaze for the best possible flavor!

What is the secret to pancakes?

The best kind of pancakes are thick and fluffy, but moist and flavorful, with a golden brown color and a buttery texture. These pancakes are just that, and here's my secret: sour cream!

Sour cream works in these banana cinnamon pancakes similar to buttermilk -- it reacts to the baking soda in the batter to create a fluffy texture. But sour cream also adds a thicker consistency and a richer flavor, which makes these banana pancakes even more decadent!

What are banana pancakes made of?

Pancakes from scratch are an easy introduction to cooking from scratch in general. In general it's a technique that's easy to follow, and most of us have seen pancakes made once or twice, even if from a box mix. But these fluffy banana cinnamon pancakes are so easy and decadent, you'll never use a box mix again! They're made with ingredients we often have on hand:

How to Make Banana Cinnamon Pancakes

I posted the quick step-by-step video you see above on my TikTok -- follow me there for more fun videos and recipes! But as you'll see in the video, making this fluffy banana pancakes recipe is so easy! It's definitely a show-stopper, but it's very simple to follow.

And then, to make your maple brown butter glaze you'll just brown your butter in a pan (it's so easy!) and whisk it up with milk, powdered sugar, vanilla, and maple syrup. It's so flavorful and easy -- I wouldn't be surprised if it becomes your go-to pancake topping!

Why are my banana pancakes gooey?

Are banana pancakes supposed to be gooey? No, they should be slightly moist inside but if they're gooey or seem underdone on the inside then you may not have cooked them long enough. Or perhaps the heat was too high so the outside of the pancake cooked before the inside had a chance to set.

How many calories are in a banana pancake?

How do I store leftover banana cinnamon pancakes?

You can store these pancakes in the fridge for up to two days in an airtight container or food storage bag -- just reheat them in the microwave until warm. You can also pop them into a freezer bag to store for up to a month! 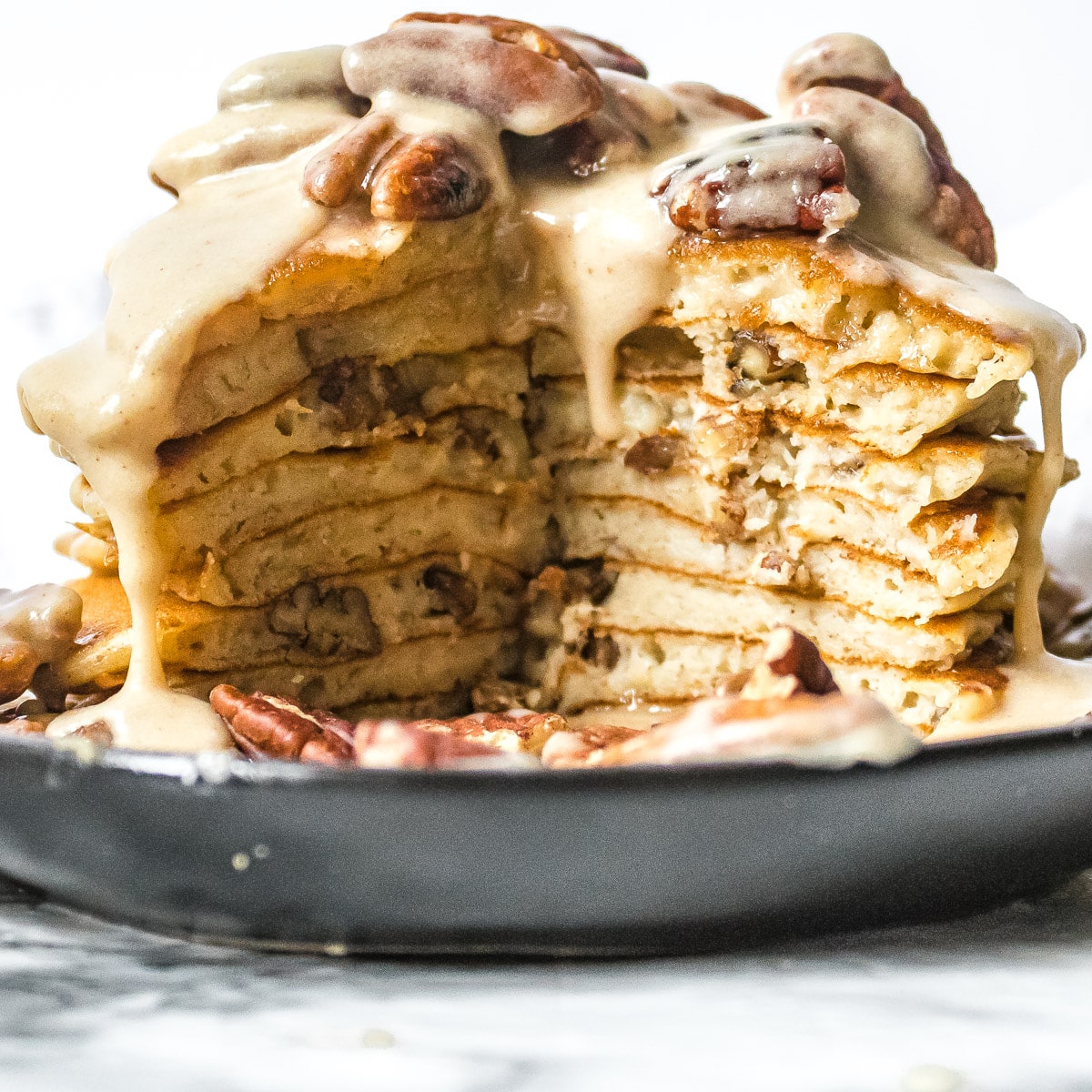 Cooking spray vs. butter: I grew up using cooking spray or oil on pancakes, but I know people who will only use butter.  I love the flavor that comes from butter, but it doesn't allow the pancakes to cook as evenly. If you want a more even cook on your fluffy banana pancakes, you can use butter-flavored cooking spray.  Overripe banana: Your banana should have lots of brown or black spots and bruises on the peel, and the inside should be mushy with a strong ripe banana scent. If you think it's too ripe/mushy to eat (but not spoiled), it's perfect.  Store-bought roasted pecans: To save time, you can buy store-bought roasted pecans and chop them and toss them in. They'll have a similarly toasty flavor.