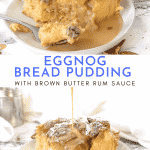 If you're looking for a stunning dessert to make for your holiday, I've got it for you. This eggnog brioche bread pudding is absolutely incredible. It's so easy to make, one of the best recipes to use up leftover eggnog, and it's delicious every time!

This eggnog bread pudding has all the best holiday flavors: eggnog, vanilla, pecans, grated nutmeg, and RUM. And it's made with brioche for an even richer, more delicious texture! But that's not even the best part! On top of our bread pudding we're drizzling a rich brown butter rum sauce made with even more eggnog! It's absolutely irresistible, and complements the flavors in this bread pudding so well!

This post is dedicated to my dad, who is the only one in my family who likes eggnog! Growing up, we always had to have a carton of eggnog in the fridge at Christmastime, and no one drank it but him! But trust me, I could eat this bread pudding all day long! I may not be a fan of eggnog itself, but I'm a huge fan of recipes with eggnog as an ingredient! It's truly so amazing and decadent -- I'm a believer!

Why do they call it bread pudding?

This dessert is called bread pudding because it's based on a dessert originating in the 11th and 12th centuries in Europe. In England, "pudding" is a traditional word for a homestyle or rustic dessert, and by the 13th century many British homes had a "pudding basin" -- a deep bowl somewhere in the kitchen meant to collect scraps of stale bread. Also called "poor man's pudding" because of its popularity with lower-income families, bread pudding back then was often made simply with water, sugar, and spices.

How do you fix soggy bread pudding?

With the steps in this recipe, your eggnog bread pudding won't be soggy or gooey! It should be moist, but mostly solid once cooked. Here's how:

Can you freeze bread pudding?

To save time, you can prepare the custard and let the bread soak overnight to make this bread pudding in the morning! Actually, the longer the bread has to soak, the better the texture will be. So you can get it all ready to bake (without the pecans on top), placed it, covered, in the fridge for up to one day. Then, when you're ready to bake, just top it with your pecans and pop it in the oven! It may need an additional few minutes of baking time since it's coming straight from the fridge.

And then for that amazing brown butter rum sauce, you'll need:

Now that you've got your ingredients together, here are the tools you'll need to make this eggnog bread pudding!

This recipe is pretty straightforward, but you will need a few tools to make it. First, you'll need a saucepan to cook your custard AND your brown butter rum sauce. But if that saucepan isn't light in color I'd recommend using a light-colored or stainless steel sauté pan to brown your butter. Then you'll bake everything up in an 8x8 baking pan or a 2-quart casserole dish.

What is eggnog made of?

Usually, eggnog is made with milk, cream, sugar, spices, whipped egg whites, and egg yolks. Often it's made into an alcoholic punch with rum or bourbon added.

What is the difference between bread pudding and bread and butter pudding? 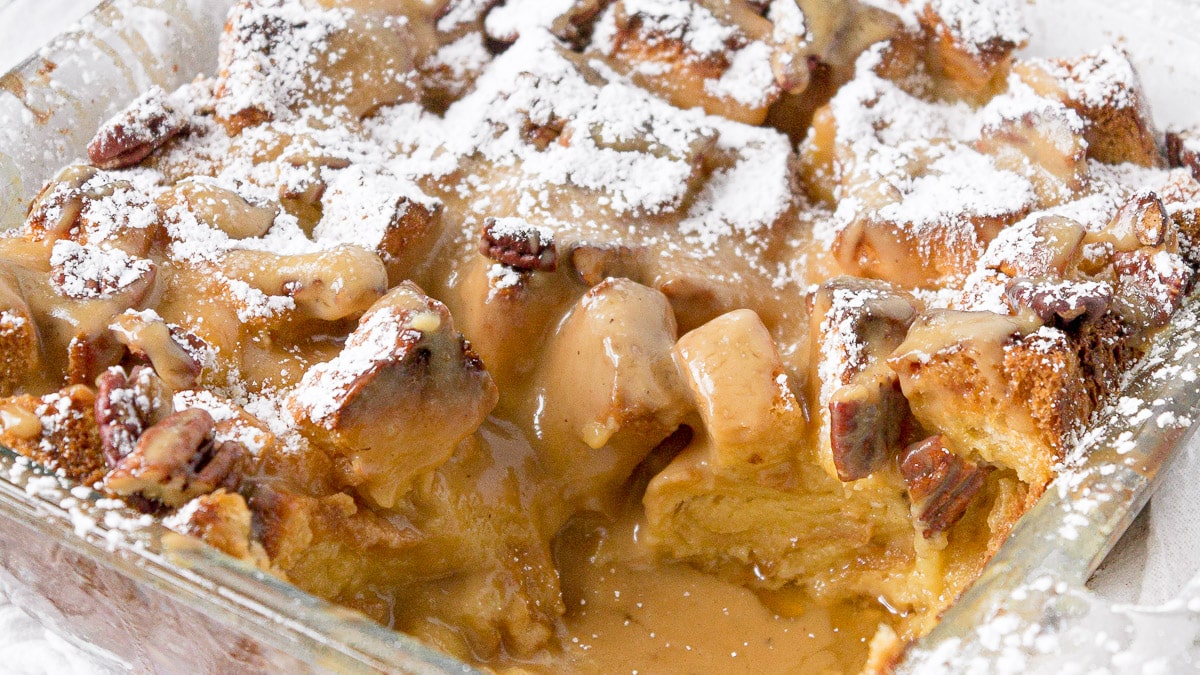 Feel free to use stale baguette, French bread, Challah, Italian bread, or even white sandwich bread for this bread pudding. I love the texture of brioche but this recipe works for lots of types of bread!

Why is stale bread better for bread pudding?

It's better because the bread needs to soak up the custard. If the bread isn't stale, it contains moisture in it already, so there won't be any room for it to soak up the liquid around it as it bakes. If you're unable to stale your bread in advance, you can place cubes of bread spaced out on a large cookie sheet, and heat them in the oven at 300°F for about 15 minutes, or until dried out and slightly toasted.

How do I store this eggnog brioche bread pudding?

You can freeze it according to the instructions I mention above, or you can store it in the fridge in an airtight container for up to 4 days.

What are some other holiday recipes I can try?

I've got so many! Check out my list of 45 Best Cookies for Cookie Exchange + Cookie Exchange Ideas! Or if you're looking for a vegan-friendly dessert, try my 50 Vegan Desserts for Christmas! And for a fun Christmas cocktail, check out my Mistletoe Margarita Recipe!

Stale bread: Make sure your bread is stale.  I leave mine out with each slice exposed overnight, but you can also place cubes of bread spaced out on a large cookie sheet, and heat them in the oven at 300°F for about 15 minutes, or until dried out and slightly toasted. Brown butter: Check out my How to Brown Butter Post for more details and images on how to brown butter. Storage and Freezing: This eggnog bread pudding will keep in the fridge in an airtight container for about 3 days. It can also be frozen, wrapped well, for up to 2 months.