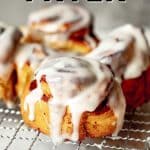 Can you put Pillsbury cinnamon rolls in the air fryer?

Yes! It's the easiest way to make canned cinnamon rolls and my new favorite sweet treat! It's so much easier, and the hot air in the air fryer makes it quicker than baking them in a conventional oven. The best part is that you can have all the cinnamon roll goodness you're craving in less than 10 minutes! The brown sugar and cinnamon flavors from the canned cinnamon roll dough are even tastier with this simple method.

Just one ingredient -- a can of Pillsbury cinnamon rolls -- and you're ready to go! Note that this recipe is for baking a 5-count can of Pillsbury Grands in the air fryer. But if you've got an 8-count can of regular-sized Pillsbury cinnamon rolls, I've got you covered! Just scroll down to the recipe card for the air fryer cooking time for those. I haven't tested this method with different brands, but I would imagine if they're about the same size as the small Pillsbury rolls, then that method would work for them as well.

You'll also need an air fryer, of course, for these delicious cinnamon rolls! I recommend at least a 3-quart air fryer to accommodate the size of the rolls. They'll be a little snug in a 3-quart air fryer, but they'll fit. Even better would be a 4-quart Air Fryer like this Ninja model.

What temp do you put cinnamon rolls in an air fryer?

You'll want to preheat your air fryer to 320°F. Generally, preheating your air fryer is advisable because it produces a crispier, more evenly cooked result. Since we're making cinnamon rolls, however, we're not going for a particularly crispy result. So you won't need a fully preheated air fryer to air fry cinnamon rolls -- I'd say just a few minutes to get it going.

How long does it take to cook cinnamon rolls in an air fryer?

That depends on which cinnamon rolls you're making! For Pillsbury Grands in the air fryer, we'll cook them in a single layer for a total of 18 minutes, flipping halfway through. And for regular-sized air fryer Pillsbury cinnamon rolls, they'll need about 8-9 minutes to cook -- see recipe card for details. Because air fryer cooking speeds vary, you might need to add another few minutes to your cook time -- just check your cinnamon rolls for doneness and adjust accordingly.

Can you use parchment paper in an air fryer?

Sure! Parchment paper is typically used to keep smaller pieces of food in place and keep the air fryer basket relatively clean. In this recipe, however, you won't need parchment paper unless you prefer it -- I find that it slows down baking a bit so if you do use it, you may need to add a bit of extra time!

Can I put foil in an air fryer?

Yes you can! If you would like to use aluminum foil, you'd use it the same way as parchment paper.

Yes! In my experience, Pillsbury Grands in the air fryer do get a nice rise. They have a lovely domed top and look great draped in cream cheese icing!

The question is -- can you apply this easy recipe to a homemade cinnamon rolls recipe? And the answer is yes! As long as the baking time and temperature fits an air fryer and the size of your air fryer basket is large enough to accommodate the risen rolls, you should be all good.

A good rule of thumb for oven to air fryer conversion is to reduce the baking time by 20% and reduce the temperature by 25-30 degrees. For example, if you've got a batch of my Cinnamon Rolls with Apple Pie Filling ready to bake, you'd cook those for about 20 minutes at 320 degrees in the air fryer. Either way, this is a great option to make fluffy air fry cinnamon rolls from scratch!

You can also use your air fryer to reheat your rolls! If they've dried out a bit, just sprinkle on a little water, but otherwise just place them in a lined air fryer basket and cook at 350 degrees for about 3-4 minutes!

What brand has the best cinnamon rolls?

Pillsbury is a classic and it's the most accessible for most shoppers, so it's my go-to for these quick air fryer cinnamon rolls. But another favorite (if you have the time to let them rise) are Rhodes cinnamon rolls. They taste just like homemade! Finally, I love Annie's Cinnamon rolls and especially love the simple ingredients and good quality, so they're another great option for a tube of cinnamon rolls.

How can I make canned cinnamon rolls better?

How do you know when cinnamon rolls are done baking?

These cinnamon rolls will be done when they're golden brown and no longer sticky or raw looking. To be sure, you can use an instant-read thermometer to make sure the temperature is over 190°F.

What temp do you put cinnamon rolls in an air fryer?

If you're making regular-sized Pillsbury rolls, the cook temp will be 350°F. But for Pillsbury Grands in air fryer, decrease the temperature to 320°F. Check the recipe card below for details!

How should I store these air fryer cinnamon rolls?

They can be stored for up to 2 days at room temperature in an airtight container, or in the fridge for up to 4 days.

Absolutely! I'd start with the same cook time as this air fryer cinnamon rolls listed below. Then, you can increase the time if they need another minute or two. 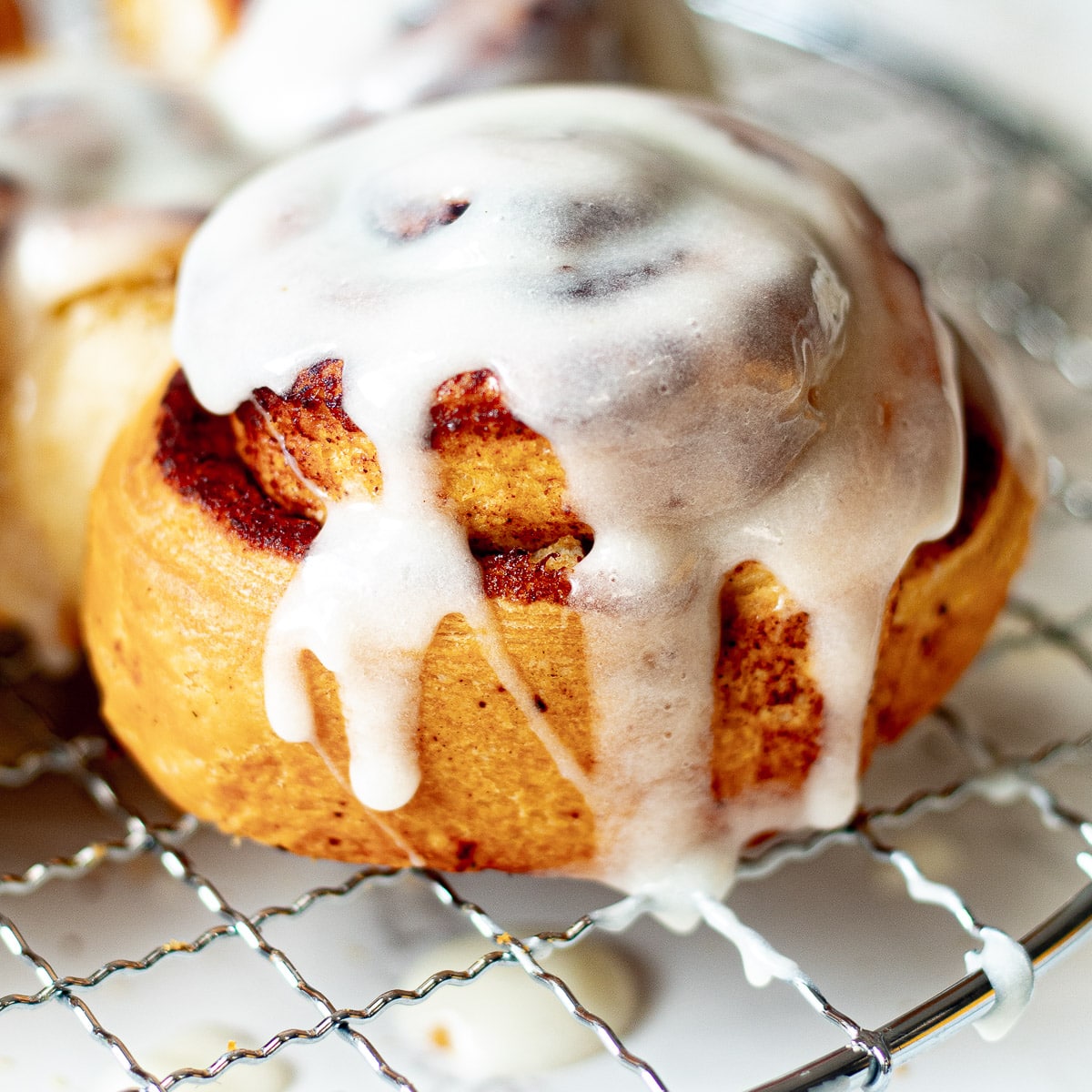 This recipe is for Pillsbury Grands in the air fryer (5-count can). To make the 8-count smaller Pillsbury cinnamon rolls:   Air Fryer Differences: Many air fryer models vary slightly in their cooking time, so check your cinnamon rolls after time has elapsed and add a few extra minutes if needed. Making air fryer cinnamon rolls from scratch: As long as the recipe's baking time and temperature fits an air fryer and your air fryer is large enough to accommodate the risen rolls. A good rule of thumb for oven to air fryer conversion is to reduce the baking time by 20% and reduce the temperature by 25-30 degrees. For example, if you've got a batch of my Cinnamon Rolls with Apple Pie Filling ready to bake, they would need about 20 minutes at 320 degrees in the air fryer.

PIN THIS RECIPE FOR LATER: