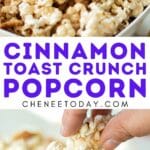 And if you like this cinnamon toast popcorn recipe, try my Coffee Cookies, my Matcha Brownies, and my Protein Mug Cake!

What is Cinnamon Toast Popcorn?

This easy cinnamon toast popcorn recipe is an easy snack idea, made with microwave popcorn and drizzled with CinnaDust and melted white chocolate! That epic cinnamon sugar combination is sure to be your new favorite sweet popcorn flavor for a party snack, a movie night treat, or a bedtime snack!

If you're a fan of Cinnamon Toast Crunch breakfast cereal, this snack has that same epic CinnaDust flavor, but in popcorn form! Delicious cinnamon and sugar, with a hint of vanilla! Add to that the crunchy, salty popcorn and the creamy white chocolate drizzle and it's the perfect snack for the entire family!

This recipe combines the flavors of my Cinnamon Sweet and Salty Kettle Corn and my Confetti Popcorn, so if you like those recipes you'll love this!

You'll only need 3 (or 4) ingredients for this CinnaDust glaze popcorn recipe, and its a pantry favorite because they're all shelf stable!

See the recipe card below for detailed instructions and a recipe video, but here are the steps for this Cinnamon Crunch popcorn recipe -- so easy the whole family can join in!

Spread popped popcorn on parchment paper in a single layer.

Melt white candy melts (if necessary, add a bit of vegetable oil or canola oil to thin out the white chocolate) and stir in CinnaDust.

Drizzle cinnamon-white chocolate mixture over popcorn and toss to coat.

Hint: this sweet snack is best served the day it's made for the freshest flavor and great texture!

This Cinnamon and white chocolate popcorn recipe contains 230 calories per 1-cup serving, 54 mg sodium, and the total sugars are 25 grams. You can see more nutrition facts in the recipe card below!

Store your finished popcorn in an airtight container for up to one week.

Be sure to melt your white candy melts carefully in short increments to ensure a smooth, creamy coating, and if necessary add a ½ teaspoon of vegetable oil to help thin it out!

This cinnamon cereal popcorn recipe is dairy free if you use a dairy-free white chocolate like these Enjoy Life Baking Chips! 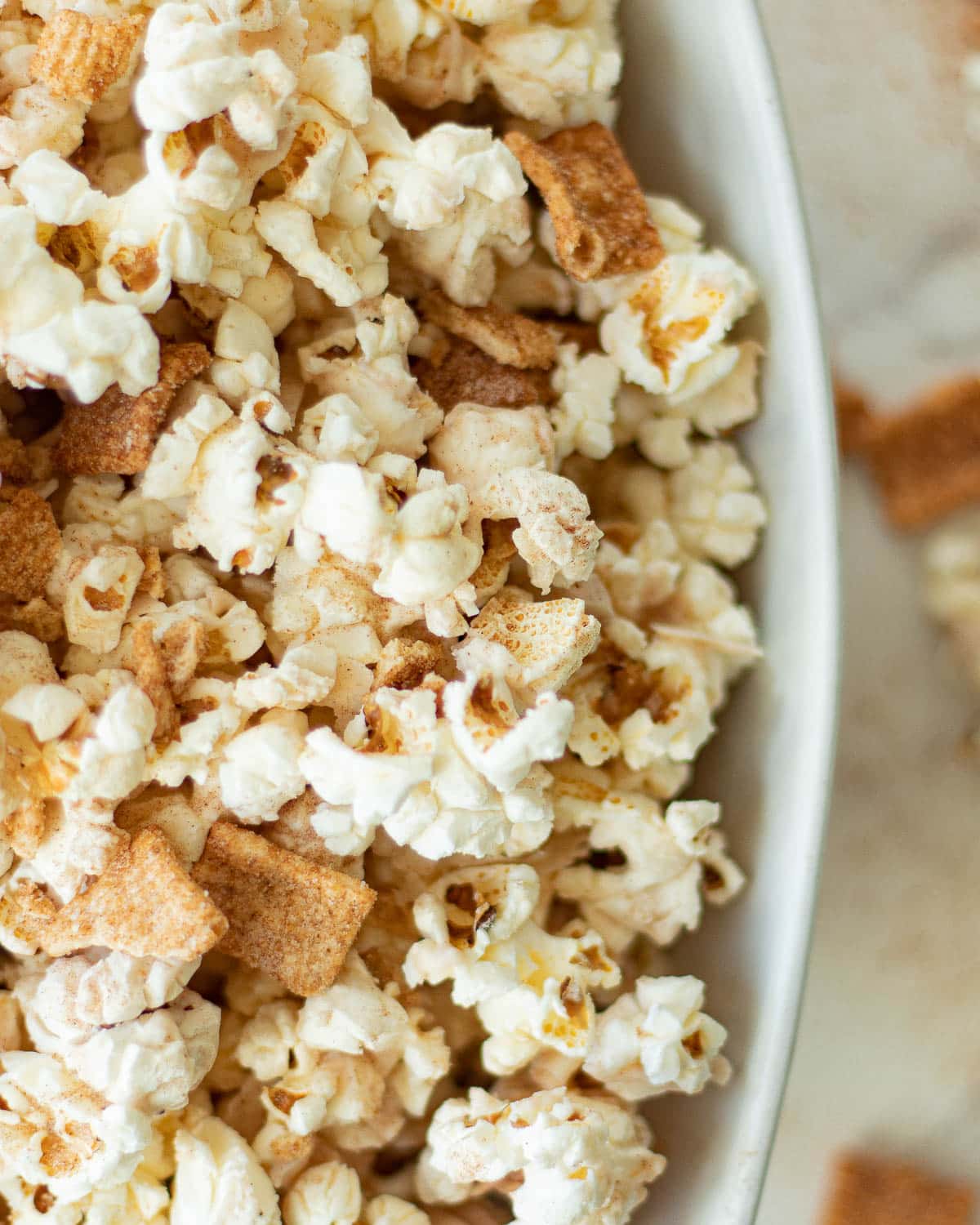 Based on the ingredients, the packaged version of the popcorn doesn't contain gluten, but it isn't marked gluten-free on its product packaging because of the risk of cross-contamination. The same is true for this homemade version, since the CinnaDust and most white chocolate candy melts are made in non-gluten free facilities.

Storage - this Cinnamon Toast Crunch popcorn will last about a week in an airtight container at room temperature.