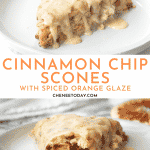 I'm a cinnamon lover, so I'm obsessed with these easy cinnamon chip scones (Starbucks recipe copycat)! And we're adding an incredible spice orange glaze to make these the best cinnamon chip scones! Hershey cinnamon chips add the perfect bit of sugar and spice in each bite! And I've also included instructions to make cinnamon scones without cinnamon chips! And for more cinnamon treats, try my Cinnamon Palmiers, my Apple Chips, and my Oatmeal Cookie Ice Cream!

If you're like me, when you go to coffee shops you love to order cinnamon chip scones -- the tender, crumbly texture dotted with little bursts of cinnamon is such a special treat! Well when you want something just like your favorite cinnamon scones from your local café, only better, try this cinnamon chip scones Starbucks recipe copycat! These easy cinnamon chip scones are buttery, crumbly, and soft, with those great little pockets of sweet cinnamon goodness. But these come drizzled with the most luscious spiced orange glaze that complements all those flavors perfectly!

Best of all, these cinnamon chip scones are so easy! You might think that homemade cinnamon scones are a complicated endeavor, but they're really not! If you've got a cheese grater, you're very close to achieving that tender crumb yourself. These scones are so simple to make, and they're perfect for a morning treat!

What is the secret of making good scones?

Here are a few of my favorite tips for the best easy cinnamon chip scones!

How do you make scones rise higher?

One trick to make your scones rise even higher is to place them on the baking sheet closer together, just barely touching. This way they'll force each other to rise higher. You may just need to add an additional minute or two to the baking time.

I sometimes have trouble finding cinnamon chips on store shelves! So if you can't get your hands on the Hershey cinnamon chips, you can make these cinnamon scones without cinnamon chips! Just add 2 teaspoons of ground cinnamon to the dry ingredients and increase the brown sugar to ½ cup, and follow the rest of the recipe as usual!

So that's what you need to make the best cinnamon chip scones! But if you want to go the extra mile and make this incredible spiced orange glaze, here's what you'll need:

To make these cinnamon chip scones, you'll only need a few typical kitchen tools, and no electric mixer or food processor! Here's what I recommend:

Why are my scones hard and dry?

Tough, dry scones can be caused by over-mixing the dough, or by inadvertently adding too much flour. Make sure you're measuring your flour correctly!

What does egg do to scones?

Adding an egg to this easy cinnamon chip scones recipe helps to bind the dough together, and adds a richer, fluffier texture.

Should you rest scones before baking?

Yes, definitely! For these easy cinnamon chip scones, we're chilling our scones in the freezer for 10-15 minutes while we preheat our oven, but you can also leave your scones in the fridge overnight, covered on a baking sheet, before baking them in the morning! Resting your scone dough helps the gluten to relax so that they can rise higher and have a more tender texture.

Can I freeze these cinnamon chip scones?

My advice would be to freeze the dough before baking, not after -- your scones will taste best the day they're baked. You can just freeze them solid uncovered on a baking sheet, then wrap them well in plastic wrap and place in heavy-duty freezer bags. You can then freeze them up to one month. Bake them from frozen, adding a few extra minutes to the bake time. 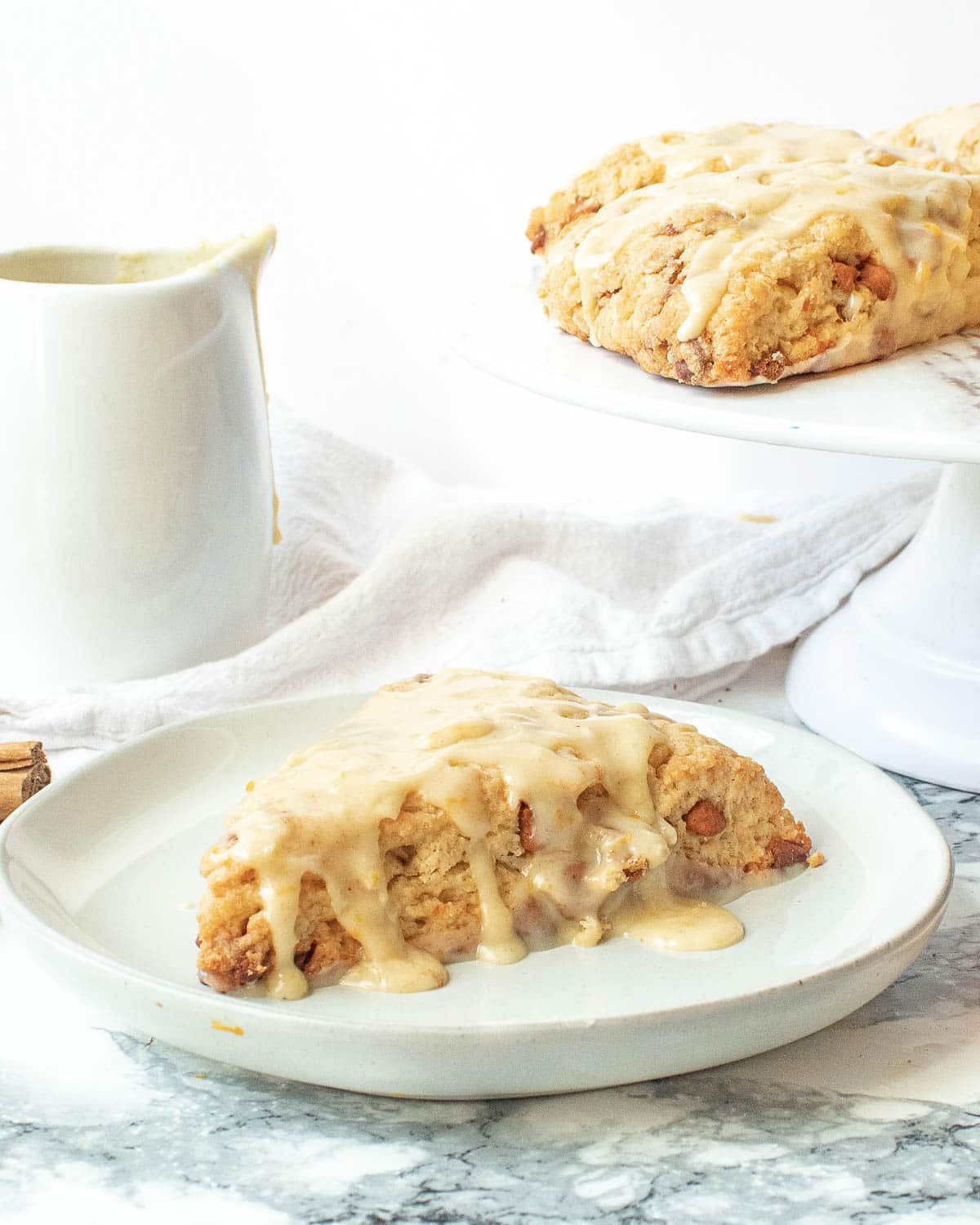 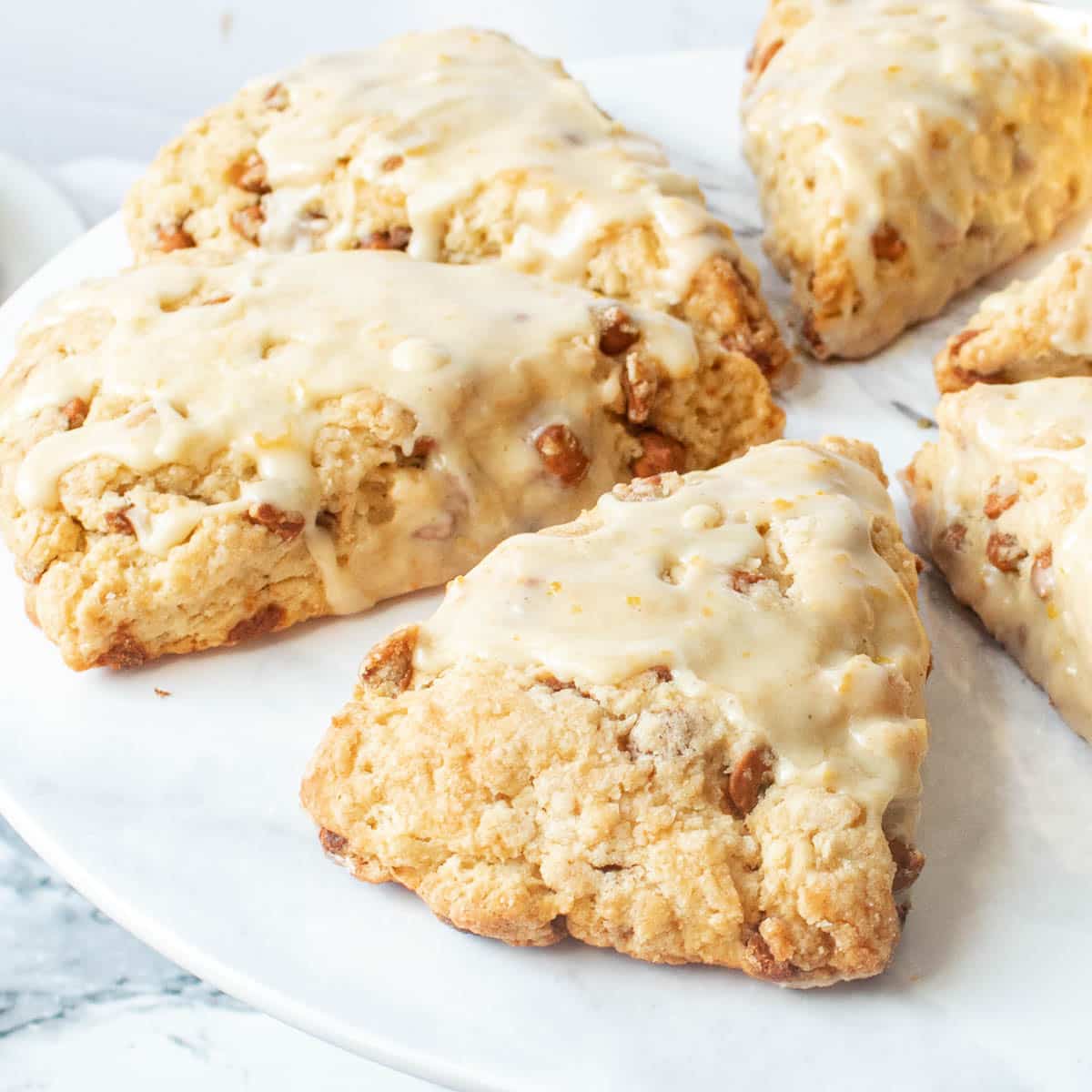 Storage and Freezing: Scones are best served the day they're made. If you plan to save for later, they're best stored frozen in an airtight container, for up to 3 months. Cold ingredients: Because we want our scone dough to be flaky, it's important that in addition to the frozen butter, our sour cream and egg should be chilled before adding to the recipe.  Cinnamon Scones Without Cinnamon Chips: To omit the cinnamon chips, just add 2 teaspoons of ground cinnamon to the dry ingredients and increase the brown sugar to ½ cup.