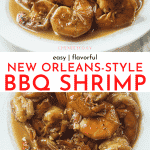 This is the best New Orleans BBQ Shrimp with beer! The easy New Orleans BBQ shrimp sauce is so buttery and flavorful - perfect for Mardi Gras or anytime you want some of that NOLA flavor! And if you like this barbecue shrimp recipe, try my Cast Iron Skillet Salmon with Maple Dijon Sauce, my Shrimp Macaroni Salad With Cajun Spices, and my Smoked Mac and Cheese with Bacon!

I'm so excited to share this recipe for New Orleans BBQ Shrimp. It may not be the first thing you think of when you think of barbecue, but it's so good that it might be your new go-to. Instead of being grilled and tossed in a sweet, smoky sauce, we're making these New Orleans BBQ shrimp with beer, butter, and pepper, and sautéing it all in a rich, buttery sauce. It's such an easy recipe to master, but SO good! And I'm sure that once you try it, you'll be enjoying it for years to come!

I've been to New Orleans a handful of times now, but I'm always up for a trip there! It's by far my favorite city to visit, and I have to admit that the biggest reason is the amazing food and drink culture there. I've had more unbelievable seafood, fried chicken, po-boys, desserts, cocktails, and beignets than I can count! Especially cocktails...

But before this turns into a travel blog, let me just get on with telling you about this New Orleans BBQ Shrimp. Suffice it to say that this is one of many amazing meals I've had in NOLA, and I can't wait to get back there to have more!

Where did BBQ shrimp originate?

As I mentioned, the recipe for New Orleans BBQ Shrimp involves a buttery, savory sauce. The idea for this dish, according to legend, originated in Chicago, believe it or not! In 1953, a regular of the historic New Orleans restaurant, Pascal's Manale, came to New Orleans from a business trip to Chicago. Upon his return, he raved about a shrimp dish he'd had in Chicago involving butter and black pepper. The head chef of Pascal's Manale, Jake Radosta, attempted to recreate it based on the description, and in the end it wasn't quite the same -- it was better!

These days, Pascal's Manale serves BBQ shrimp as a sandwich at lunch, or with bibs at dinner -- the buttery sauce can be messy, and you need to use your hands to peel the shrimp!

How do you eat New Orleans BBQ shrimp?

The bbq shrimp recipe, which has spread throughout the restaurants of New Orleans, generally contains large head-on shrimp, butter, Worcestershire sauce, spices, black pepper, and white wine. It's often served with crusty French bread to soak up the delicious sauce, but in New Orleans you can also find this barbecue shrimp as part of a po-boy sandwich, or served with grits or rice.

This New Orleans BBQ shrimp with beer is SO easy. It comes together with just a few ingredients, and can cook in just 5-10 minutes. With just a skillet and a spatula or wooden spoon you can make this delicious shrimp dish! Here's what you'll need:

Once you have those ingredients ready, you're ready to get started on this quick New Orleans BBQ shrimp!

How to Make New Orleans BBQ Shrimp with Beer

This recipe takes about ten minutes from start to finish. I would recommend getting it started once you're fully ready to eat! I made this recipe on my Instagram Live recently, and even with all my chit chatting, the whole video was over in 15 minutes!

Why is it called barbecue shrimp?

According to the chef and co-owner at Pascal's Manale, the name comes from the reddish tint that the shrimp have once they're cooked. 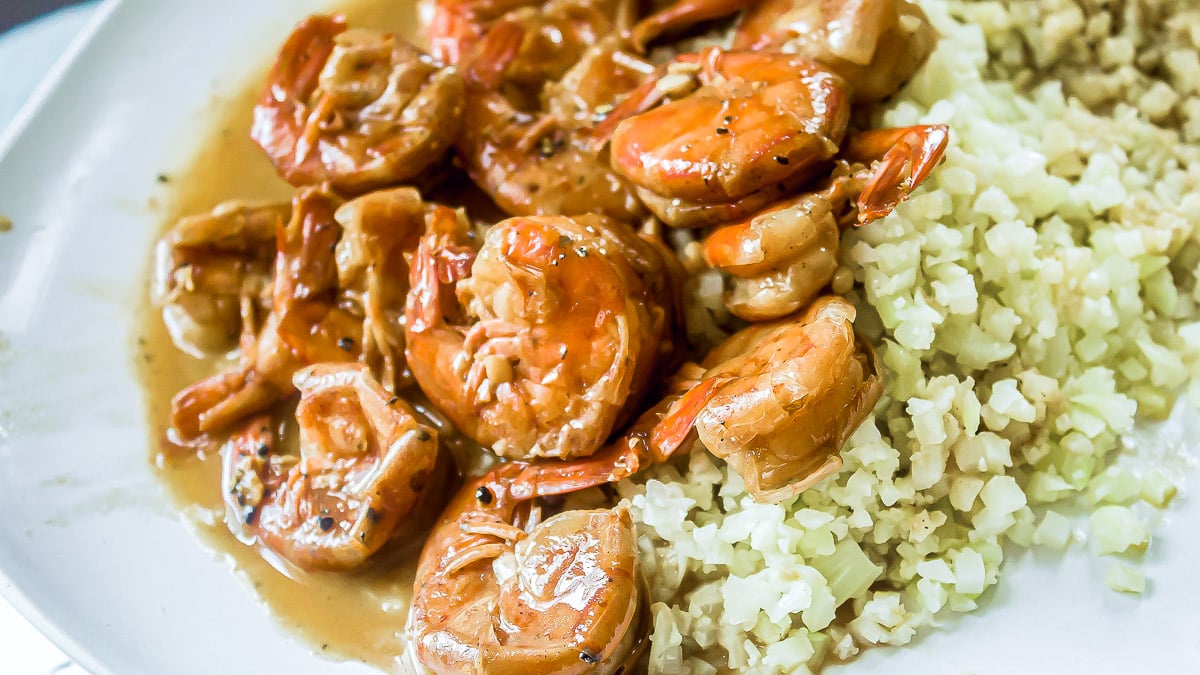 What size shrimp do I need?

The bigger, the better! I typically use jumbo or colossal shrimp for this recipe, but if you have smaller ez-peel shrimp, that can work too, just be very careful because they'll cook faster. You don't want to overcook your shrimp!

This barbecue shrimp recipe would be great over mashed potatoes, salad, rice, or the traditional way with crusty French bread. You can also use this recipe to make New Orleans BBQ shrimp and grits! 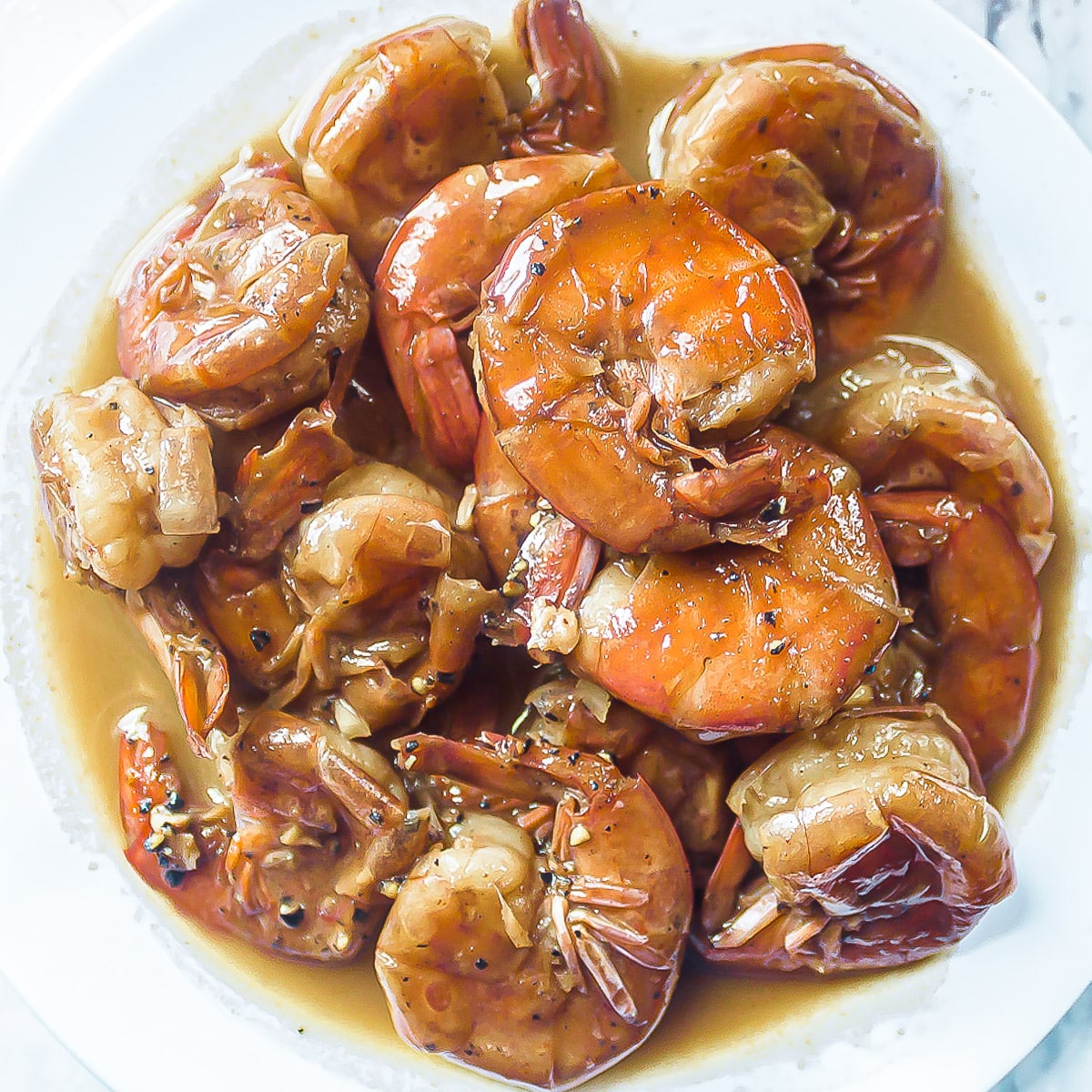 Shrimp: You should use jumbo, extra-jumbo, or colossal shrimp with the peel on.  If the heads are on, even better for the flavor! I usually use ez-peel shrimp because it's easiest to find and still provides that extra flavor from the shells.   Hot sauce: Tabasco is traditional sauce to accompany barbecue shrimp, but I usually use Crystal. Alternative serving ideas:

PIN this recipe for later!