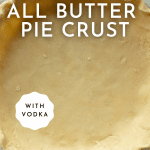 This flaky butter pie crust is the best never fail flaky pie crust recipe! If you're looking for a no fail pie crust with butter, add a little vodka to make it the flakiest, best pie crust recipe ever! You can also double the recipe to make this flaky pastry recipe into a double pie crust recipe! Use it for my Brown Butter Sweet Potato Pie Recipe or my Pecan Pie Tart! Or save leftover scraps for my Pie Crust Cookie Twists!

Homemade flaky butter pie crust is a truly magical thing. For many years in my baking I used store-bought pie crust. And I still don't have anything against store-bought crust if time is a factor. But if you have a food processor and a few minutes to try it out, this no fail pie crust with butter is actually super easy to make yourself. And it's totally worth it.

What is the secret to a flaky crust?

If you've got a bar cart with a little spare booze, this is your moment! Half of the liquid in the dough is vodka, and you might be wondering why? It's because vodka produces the best never fail flaky pie crust recipe!

What causes flakiness in pie crust made from butter?

Vodka evaporates more quickly, which allows those flaky bits to form more easily in the oven, and because it replaces water, there's less water to promote gluten development in the dough. The alcohol cooks off, and because vodka is basically flavorless, there's not impact on the flavor of the crust. The result is a tender, flaky all butter pie crust that is much more forgiving than a typical all-butter crust recipe.

If you don't have vodka, you can use any spirit with at least 40% alcohol, like tequila, rum, or whiskey, but just be aware of the flavor that your spirit of choice might produce in your crust. Although to me, a pie crust with hints of bourbon or rum sounds very interesting! If you don't have vodka or another spirit, white vinegar is a great alternative.

Check the recipe card below for precise measurements, but here are the simple ingredients you'll need for this no fail pie crust with butter:

For this flaky butter pie crust recipe, you'll need either a stand mixer, a food processor, or a pastry cutter. Once the dough is chilled, you'll also need a rolling pin to roll it out. Then you'll need a pie pan! This recipe fills a 9-inch pie plate.

You may also want to use a nonstick silicone pastry mat to shape and roll out homemade pie dough. I also use a bench scraper to help with handling the dough.

Check the recipe card below for detailed instructions! But here are the basic steps for this flaky butter pie crust recipe:

How do you keep a pie crust flaky?

An all butter pie crust recipe can become tough due to an excess of gluten development, either from too much water or overworking the dough. To prevent that with this no fail pie crust with butter, we're replacing some of the water in the dough with vodka, which doesn't activate gluten the way water does. To further prevent gluten formation, don't overmix your pie dough! Just mix it barely enough to bring the dough together. That way you'll ensure the best flaky pie crust recipe!

Does butter or shortening make a flakier crust?

Definitely butter! Pie crust made with butter has that delicious butter flavor that you can't get with shortening crust! Also it has just enough gluten formation to make the crust sturdy, and the pockets of cold butter expand as it bakes to create that flaky pastry recipe we all want!

Which butter is best for baking pies?

Your butter should be very cold for this flaky pastry recipe! If it's room temperature, it'll melt faster in the oven and won't make the air pockets you need for a flaky texture and the perfect pie crust!

This homemade pie crust recipe makes one single layer of pie crust for the bottom of a pie pan -- to make a top crust as well as a bottom crust, click the "2x" button at the top of the recipe card below to double the ingredient measurements.

How do I make this flaky pie dough for a savory pie recipe?

This recipe makes a sweet pie crust, but to make a savory pie dough, you can just omit the sugar and follow the rest of this easy pie crust recipe as usual!

What can I make this all butter pie crust recipe?

This flaky butter pie crust recipe is perfect for recipes like my Leek and Asparagus Quiche with Bacon and Gruyère, fruit pies like my Cherry Crumb Pie, or with hand pies like my Sweet Potato Pop Tarts or my Peach Mango Pie recipe! You can also make a double pie crust recipe and use it for my Deep Dish Caramel Apple Pie! 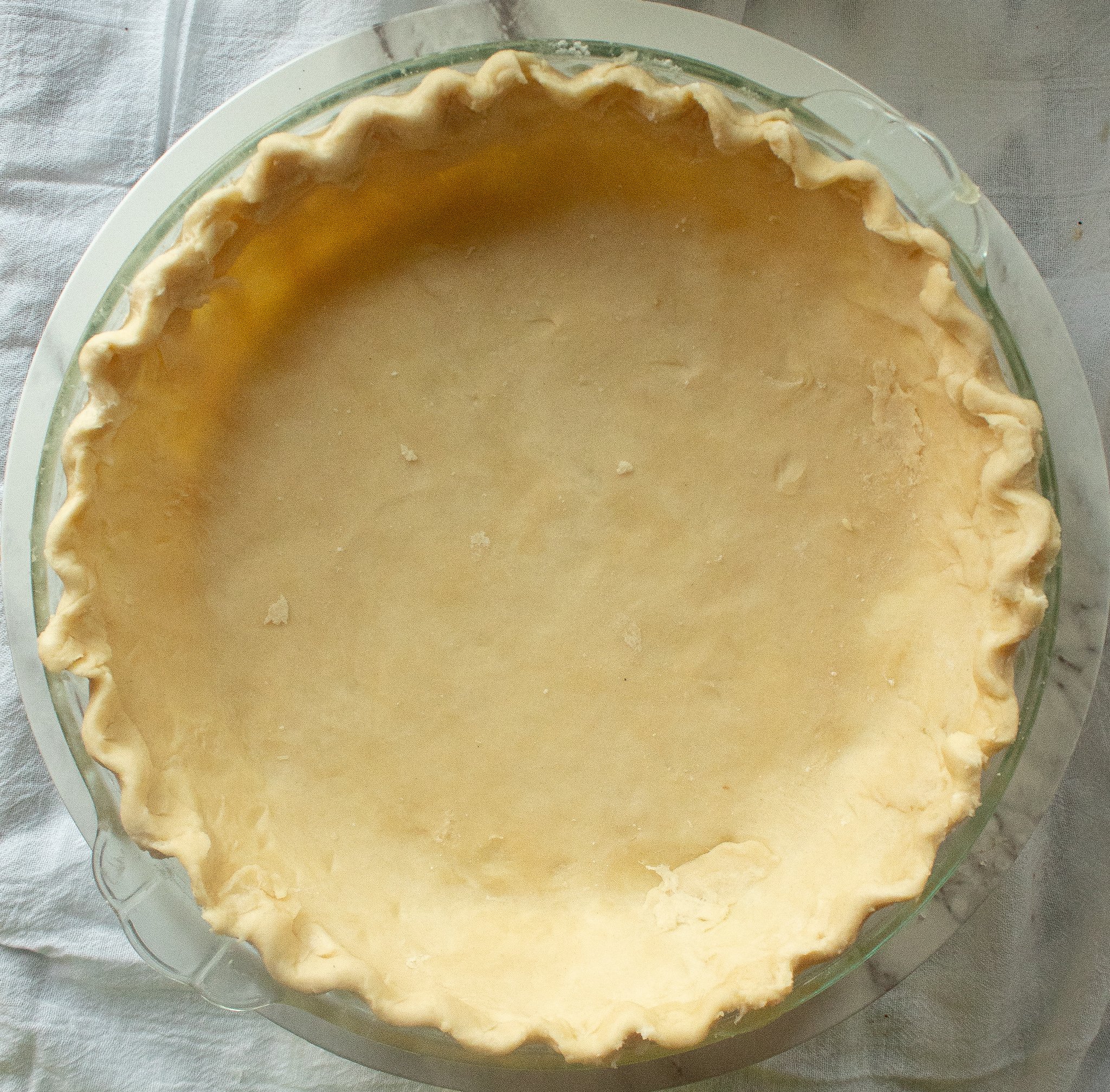 Single Crust: This recipe makes one single layer of pie crust for the bottom of a pie pan -- to make a top and bottom crust, click the "2x" button at the top of this recipe card to double the ingredient measurements. Vodka: The vodka in this recipe is meant to allow for the dough to come together easily, while evaporating quickly to keep the dough flaky and tender.  Make sure it's very cold -- I just pop mine in the freezer the day before.  If you don't have vodka or another spirit, white vinegar is a great alternative. Make ahead: Dough wrapped in plastic can be stored in the refrigerator for up to 5 days, or frozen in plastic freezer bags for up to 2 months.